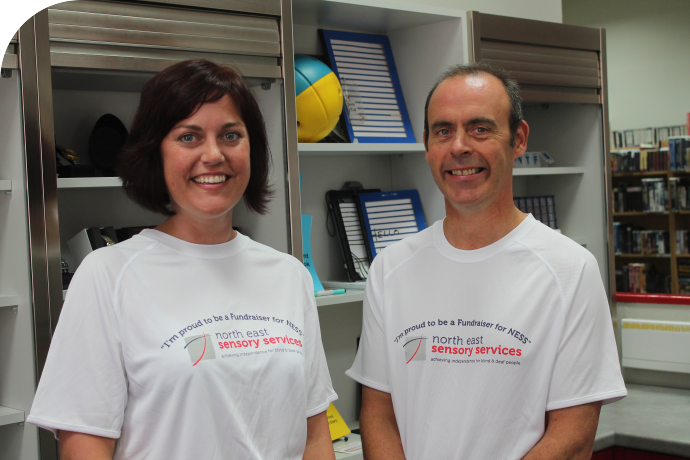 Charity exec guided to first half marathon at Great Run

A registered blind charity executive is preparing to take part in his first half marathon to raise money for blind and deaf people in the north-east.

Graham Findlay, chief executive of North East Sensory Services (NESS), who is registered blind, is a regular runner, but the 13-mile challenge is the longest race he will have ever taken part in. Graham will run with Diana Daneels, young people’s sensory services coordinator for NESS, who will act as a running guide.

NESS is one of the north east’s oldest charities, supporting over 6,500 people who have serious sight or hearing loss.

Graham, who has a small amount of sight, is one of 60 people taking part in the Great Aberdeen Run for NESS. The rest of the team includes Neil Skene, who is blind, and Leona Glennie, who is deafblind. Neil and Leona will also run with guide runners, who will help them negotiate Aberdeen’s streets and the busy crowds expected.

Graham said: “I am looking forward to taking part in the first half marathon in Aberdeen. I work in the city and know the streets fairly well, so I am thrilled that an event of this size is taking place. Along with Neil and Leona, we will have a team of guide runners, who will take turns in supporting us. Mostly the guides communicate with us verbally and physically, indicating twists and turns in the road, as well as letting us know if there are people or obstacles ahead.

“We are attached at the wrist by a strap or a piece of rope, up to about 500cm. The guide helps determine where to run in the pack – we need a bit more space than a single runner – it’s a bit like adjusting from riding a bike to driving a bus. The guide will let me know what’s ahead – for example “curb up” or “cobbled street”, or even “puddle”.

“Most races allow visually impaired and deaf runners to go off first – to give us a head start – and to give those who are looking for a sprint start plenty of space to see where we are.

“I train with my sons and good friends, as well as running in the gym at the NESS resource centre in John Street, Aberdeen when the weather isn’t so good.

“We have a great running group here at NESS, and there are lots of us taking part, not just in the half marathon but also in the 10k, so we will be well represented. Give us a cheer if you see us – we will all need al the encouragement we can get!

“Luckily, as NESS is a partner of the run, we have a marquee in the event village, and we will have a masseur from Helping Hands Therapy available for NESS runners to soothe our aching limbs!”