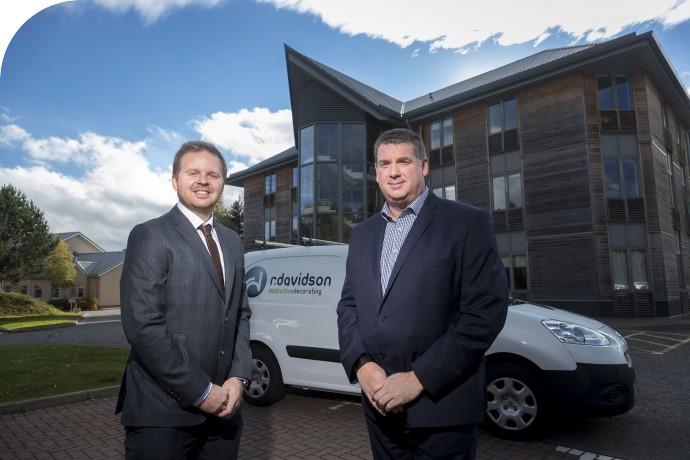 A leading north-east painting and decorating firm has appointed a commercial director as the business eyes continued growth locally and across the Highlands.

Gavin McCombie, who joined R Davidson (Banchory) Ltd. Painter and Decorator eight years ago as a trainee quantity surveyor, is moving into the board level position on 1 November.

The business, which has 90 staff in Aberdeen and an additional 18 in the north following the acquisition of Inverness firm, Kelman Decorating, earlier this year, has seen steady growth across both regions in the past three months.  The firm has doubled the team in the north since June to meet client demand.

Managing director, Trevor Mutch, who took over R Davidson in 2004 has grown the business, which is headquartered in Banchory, by 50% in the past 14 years.

He says there has been positive growth in 2018 in both the domestic and commercial divisions and Gavin’s appointment will benefit them both as the company prepares to expand further: “Gavin has been a great member of the team since he joined us and we are delighted to reward him for his commitment and loyalty.  We have a great management team that can support growth and Gavin is enthusiastic, and motivated and has the drive to support the future plans.  It is also beneficial to add some youth to the board and he will bring fresh ideas as well as additional commercial focus to the board table.  This move will give Gavin career progression in the company and allow him to develop his skills at the next level.”

The management team has plans to grow the Inverness side of the business and double the workforce to the mid 30s during the coming 12-18 months.  With the Aberdeen housing market showing signs of improving, the business is in a strong position to capitalise on projected growth in the north east.

Gavin, 29, from Montrose, graduated with a quantity surveying degree from RGU in 2010. He said: “There has always been career progression in my role and Trevor has always shown a lot of faith in me, so I am very much in tune with the ambitious growth plans for the business.  There is a strong management team which I respect, so this is a great opportunity for me and I’m excited about what the new role holds.  I have a good commercial awareness in the business and have a real handle on what’s going on day-to-day, so this will benefit me at board level while I establish my position.”

Founded in 1930, R Davidson is one of the north-east’s longest established home improvement contractors, specialising in delivering bespoke painting, decorating, Ames taping and plastering services for the private domestic and commercial markets. In recent years, the firm has worked on some of Aberdeen’s most prestigious developments.