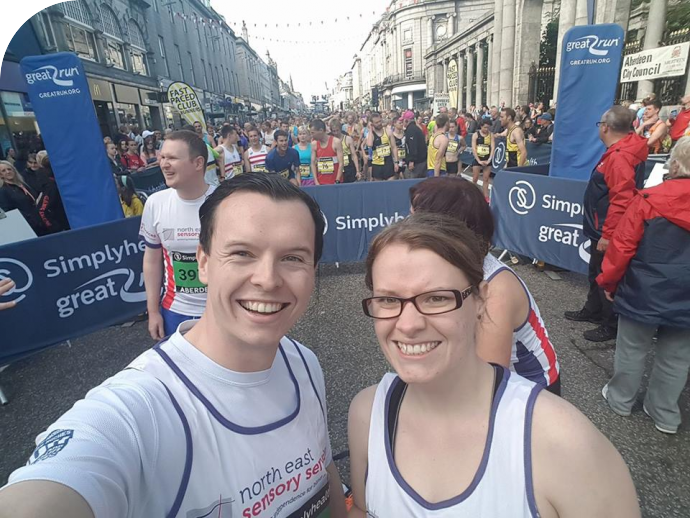 Local runners are being encouraged to take their fitness to the next level by taking part in a free learn to guide event being held in Aberdeen.

Mr Mair will be offering free taster sessions at the Beach Leisure Centre on Saturday 14th October 2017 at 10.30am. Mr Mair, who has been running long distances since he was 20, recently guided Leona Glennie, who is deafblind, during the Great Aberdeen Run Half Marathon.

Runners interested in adding a new dimension to their workouts, are invited to the taster session which is taking place as part of a larger fundraising event at the facility. Mr Mair will demonstrate the key skills of guiding, which utilises a strap to keep guide and runner together.

North East Sensory Services (NESS), which supports over 6500 blind and deaf people in the north-east has many staff members and supporters who take part in running challenges, both to prove their ability and to raise money for the charity.

Mr Mair said: “I decided to take part in guide running to give my own running an extra challenge. I contacted NESS and was put in touch with Leona, which has been incredibly rewarding. I’ve been learning British Sign Language, as guide runners are needed for visually and hearing impaired people.  We hope lots of people will come along on the 14th to get a taste of how rewarding guide running can be – both for the person you are assisting and for yourself too.”

Graham Findlay, CEO, NESS, said: “Many of our staff run, both fully sighted, visually impaired, deaf and hard of hearing, including myself, and guide runners are always needed. Becoming a guide runner is mostly about patience and communication, and every one who enjoys running can take their fitness to a new level by learning how to be a guide. The success of our service users and staff at the Great Aberdeen Run prove that, with the right support, sensory impairment need not get in the way of fitness.”