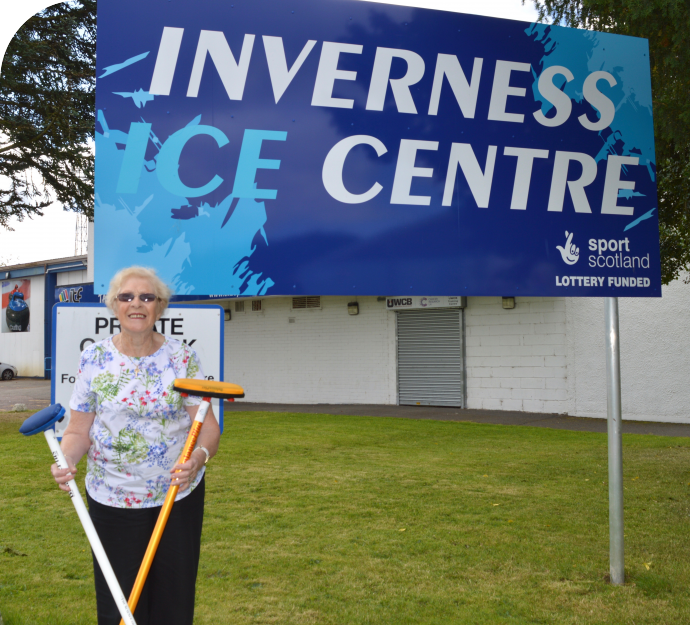 One of the largest wet weather facilities in the North has secured its own defibrillator, which members say may just save someone’s life.

The Inverness Ice Centre on Bught Drive raised more than £1,600 to ensure the well used sports and events facility has the life saving equipment available to all users of the centre.

The idea to install a defibrillator was initiated by Maureen Fraser, a member of the Inverness Curling Club for more than 40-years.

Mrs Fraser’s husband, Bill, died at the age of 79, four-years ago after suffering a cardiac arrest at his local bowling club in the Highland capital.

Mrs Fraser led a fundraising drive to have a defibrillator installed at the bowling club following her husband’s death, along with the help of fellow curler, Stewart Sturrock.

She added: “I just felt that Inverness Ice Centre is such a big organisation with so many people using the facility that it really should have a defibrillator.

“There are 900 curlers, as well as ice skaters and ice hockey members that regularly use the centre.

“It will make a huge difference – no one knows when it’s their time. We really should have had it a long time ago. It might save someone’s life and if it can save just one person then it’s worth it.”

Mrs Fraser said she had written to the presidents of all the provinces to donate which attracted a good response. Those who have donated include Highland, Grampian, Moray, Ross and Sutherland and Nairn Curling Club, as well as many individual donations from curlers, skaters and ice hockey players.

Mrs Fraser’s daughter, Jane, who is commercial manager at the Ice Centre, said she was delighted the centre now has the life saving equipment installed.

She added: “So many people use the Inverness Ice Centre. As well as our own members we also host many events, which attract large crowds. The fact we will now have a defibrillator available to anyone not just in the centre but in the surrounding area, such as Bught Park, could make a huge difference to someone who suffers a cardiac arrest.”

Ross Cowie of Skye charity Lucky2bhere, which installed the defibrillator and trained key members of staff at the centre on how to operate the equipment, says it’s fantastic that the centre has life saving equipment on the premises.

He added: “Since its foundation, Lucky2bhere has been a strong supporter of healthy living, and worked hard to promote the merits of exercise and sporting participation within local communities. Similarly, the Inverness Ice Centre, across its rich history as a well-loved sporting venue, also has a strong pedigree in encouraging and enthusing people to get involved in sport, whether it be on a fun and casual basis or in a competitive format.

“By providing training and equipment in collaboration with the ice centre, the Lucky2bhere volunteers can pass on Emergency Life Support (ELS) skills, which, while hopefully never needed, can serve as a vital tool not just for the centre but for the benefit of the wider community.”

Anyone who would like to donate to the Inverness Ice Centre defibrillator appeal should visit: www.justgiving.com/fundraising/invernessicecentre

The Inverness Ice Centre underwent a £700,000 upgrade earlier this year, which included a new bespoke chiller pack, air-cooled condensers and control system along with a new floor and barriers in the ice hall.

Inverness Ice Centre also plays host to the annual Strictly Inverness dancing extravaganza, which sees thousands of pounds raised each year for the Highland Hospice and the Ice Centre itself.

The Inverness Ice Centre changed ownership a number of times before its users bought it in 2002, and it became a charitable organisation as part of the process.