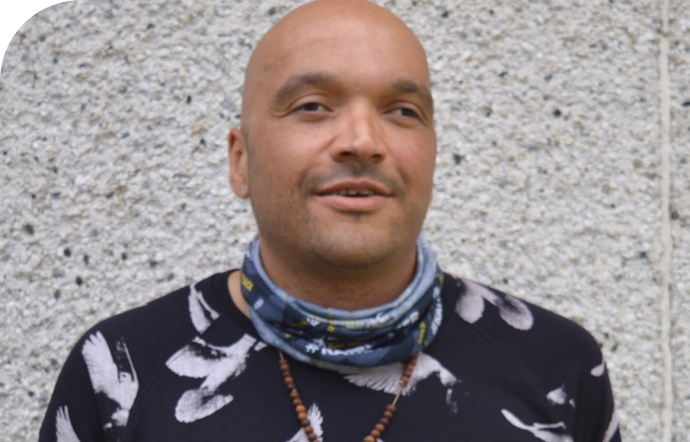 An Inverness man who permanently lost sight in his left eye at the age of 20 says he’s battled back to a relatively normal life thanks to the help and support he has received from a Highland charity.

Marcus Bruce Konoso, who is now 34, hopes to raise funds for Sight Action, which provides support and rehabilitation to blind and visually impaired adults and children, by taking part in the Loch Ness Marathon on 24 September.

Marcus, from Merkinch, has also volunteered with Sight Action for a number of years. He started by digitising audiotapes into mp3 files for use as talking books for those who are blind or partially sighted – a service his own granny used.

He said: “I have received tremendous help through Sight Action and I just wanted to be involved in some way as it’s such a good charity. It’s a real community asset.”

Marcus who has a background in IT, lost the sight in his left eye following an accident in 2003.

He added: “I feel healthier now and I’m also really inspired seeing what other people with similar conditions can do.

Marcus, a keen cyclist, who now helps with the tandem cycling group for partially sighted people, as well as a walking group run by the charity, says he was inspired to push himself to take part in the marathon by individuals at the charity.

He said: "Volunteer co-ordinator, Sarah Shaw's has been a big help to me. Her organisational skills helped me to find my focus and help create a digitised audio library. She gave me opportunities that most wouldn't because of my unsettling past. Basically it was her aptitude for her volunteers and her work ethic to help sensory impaired folk, that inspired myself to do the marathon.”

Marcus says his Christian faith has also played an important part in his own recovery and progression. He added: “Former Beechwood House chaplain Derek Morrison has been coaching me with my training and has been a big help to me. Both Sight Action and my faith have been essential to my progression and being able to move forward.”

Marcus, who is over 6ft and weighs 15 stone, said being such a big guy hasn’t been easy when it comes to training.

He added: “It’s been hard going. It’s my first marathon so it’s a big deal for me. I hope to do it in three and a half hours. I have put in a lot of training and now run 23 miles every weekend which has upped my fitness.”

Marcus said Martine McIndoe-Nelissen Grade had also been instrumental in his training. Martine who leads and drives the minibus for the Sight Action walking group has been helping to guide and train Marcus on two Munro's, Ben Wyvis and Braeriach.

Marcus hopes to raise around £200 for Sight Action through his marathon effort. If it goes well he hopes one day he may even manage the London Marathon.

To donate go to: www.virginmoneygiving.com/marcuskonoso

Sight Action was established in 2010 to serve blind and visually impaired people in the Highlands and Western Isles by providing a number of services that will support and enhance their quality of life.

Sight Action currently has 2,500 people on its database and welcomes around 500 new clients each year. It has offices in Inverness, Wick, Thurso and Stornoway. It is supported by NHS Highland, The Highland Council and Comhairle nan Eilean Siar and provides additional services that help clients to be as independent as possible.