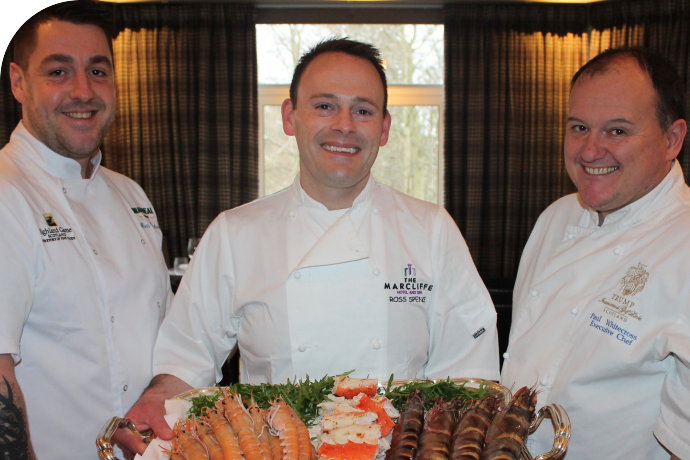 Four of Scotland’s most respected chefs are combining their expertise to create a feast designed especially to excite the senses.

The executive chefs from The Marcliffe Hotel & Spa, Trump International, Pompadour by Galvin and The Rothesay Rooms are set to tantalise the tastebuds of guests at Savour 2018.

The dinner, being hosted at the Marcliffe on Saturday, 24 March, is set to be a sensory sensation with each of the chefs cooking up a course each to deliver a stunning menu showcasing Scotland’s finest produce.

The event will also raise funds for local sensory charity, North East Sensory Services, which supports people of all ages from babies to grandparents, who are born deaf or blind, and those who have sight and/or hearing loss.

It is the second year of the event and the chefs, Ross Spence from The Marcliffe, Paul Whitecross from Trump International, Daniel Ashmore from Pompadour by Galvin in Edinburgh, and Ross Cochrane from The Rothesay Rooms in Ballater will work together to develop a sensory menu for guests to taste, smell, see and enjoy.

Head chef at Pompadour by Galvin in Edinburgh’s Waldorf Astoria, Daniel Ashmore, who has worked in a number of Michelin star restaurants in London said: “We craft exceptional meals using the best of Scotland’s natural larder to create the finest French-inspired cuisine. Savour offers a fantastic opportunity to collaborate with like-minded chefs to prepare a really unique and exciting menu for a very worthy cause.”

Paul Whitecross from five star Trump International, who has cooked for the President of the United States and Pavarotti and is a member of the World Master Chef Society, added: “Savour 2017 was great fun and together we produced a superb dinner which really tantalised the taste buds. Trump International is a keen supporter of local charities and we are confident this event will raise a lot of money for NESS, and produce an unforgettable evening for every one of our diners.”

Ross Spence, who previously worked for the Duke of Westminster in Chester and has been executive chef at the five star Marcliffe Hotel & Spa for the past ten years, said: “We have a close association with NESS, which does very important work for those with hearing or sight loss in the north east, and everyone at the Marcliffe Hotel & Spa is looking forward to another great evening at Savour. I am particularly excited about sharing my kitchen with Daniel, Paul and Ross who will all create impeccable dishes for our guests.”

Finally, head chef at Prince Charles’s restaurant in Ballater, The Rothesay Rooms, Ross Cochrane has worked across Scotland and last year won North East Seafood Chef of the Year and North East Chef of the Year. He added: “It's a great honour to be working alongside these three respected Scottish chefs and I’m very much looking forward to combining our culinary skills to create something special for the guests at Savour.  It is a fantastic concept to develop a sensory themed menu for such a deserving charity and I will relish the challenge to serve a stunning dish as part of this five star feast.”

NESS CEO Graham Findlay commented: “Once again we have four tremendous chefs who are all giving their valuable time to help support NESS. I am sure it will be a fantastic evening with a menu never seen before in Aberdeen.”

Savour 2018 follows the success of the inaugural Savour event that was held in 2017, and saw Ross Spence and Paul Whitecross collaborate with Nick Nairn and Tony Singh to produce a sense-enhancing evening, which raised over £20,000 for the charity.